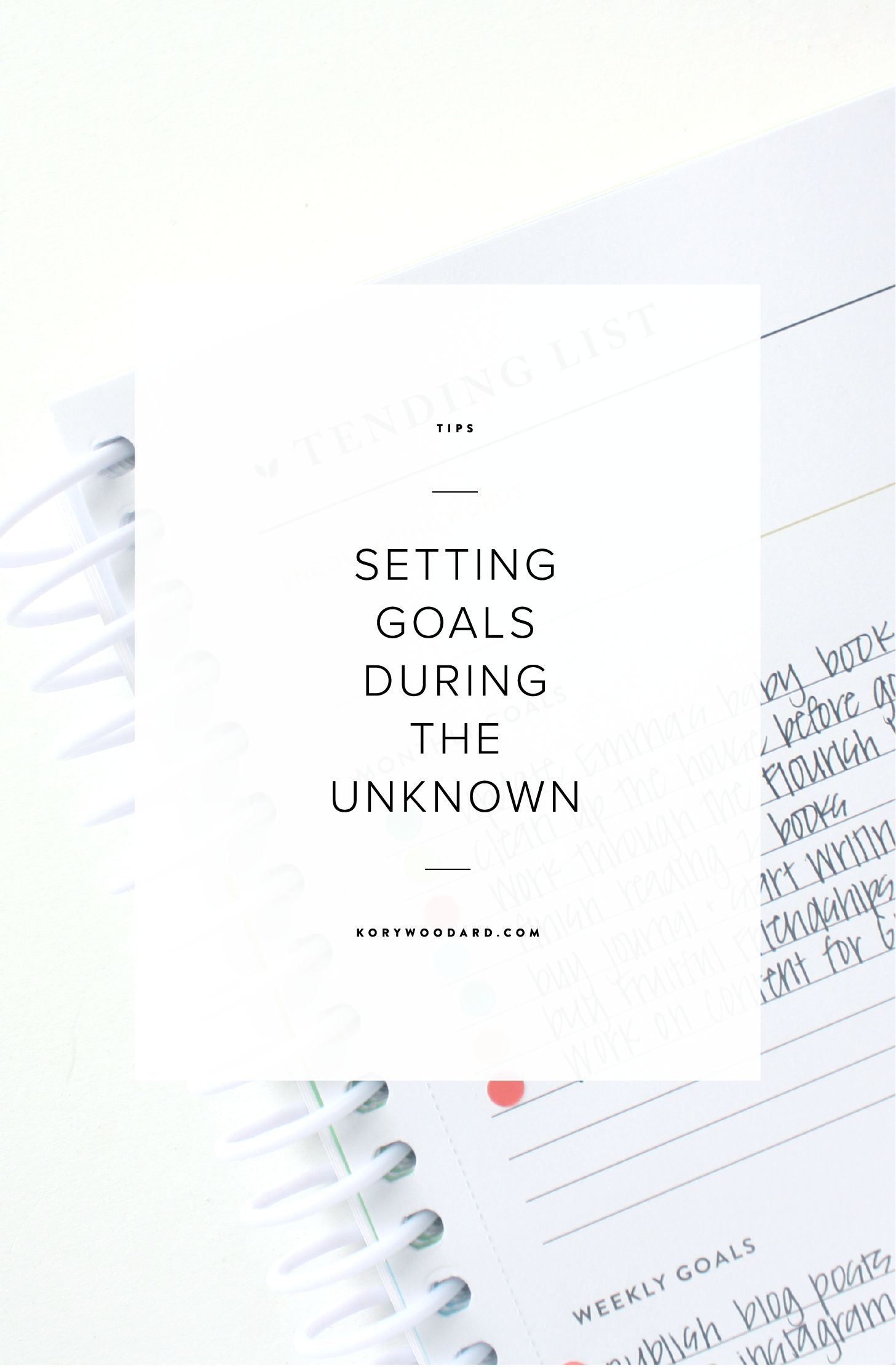 In case you’re living in a weird fugue state and didn’t know it, it’s January. Every year during this month everyone on the internet is talking about goals. They’re sharing ones they set, telling you how to set your own goals, and even how to be successful with the ones you set. I know because I’m always one of those people, and this year is no exception.

Instead of adding to all of the usual topics around goals this month, I wanted to write a post that I could have used myself over the past two years (and honestly even this year as well), and that’s talking about setting goals when you just have no clue what life is going to look like.

If you’re new around here (or in case you forgot) in 2016 there was a lot of unknown around how our year would go as we knew we’d be moving, but we didn’t know where to for a while since we’re military and were waiting on orders. Even after we moved, we had no clue what to expect with my husband’s schedule. Last year started out a little better, but I soon found out I was pregnant and didn’t know what to expect in terms of how easy or difficult the pregnancy would be. This year is similar because who knows what to expect with a baby, a deployment schedule, and a business?! 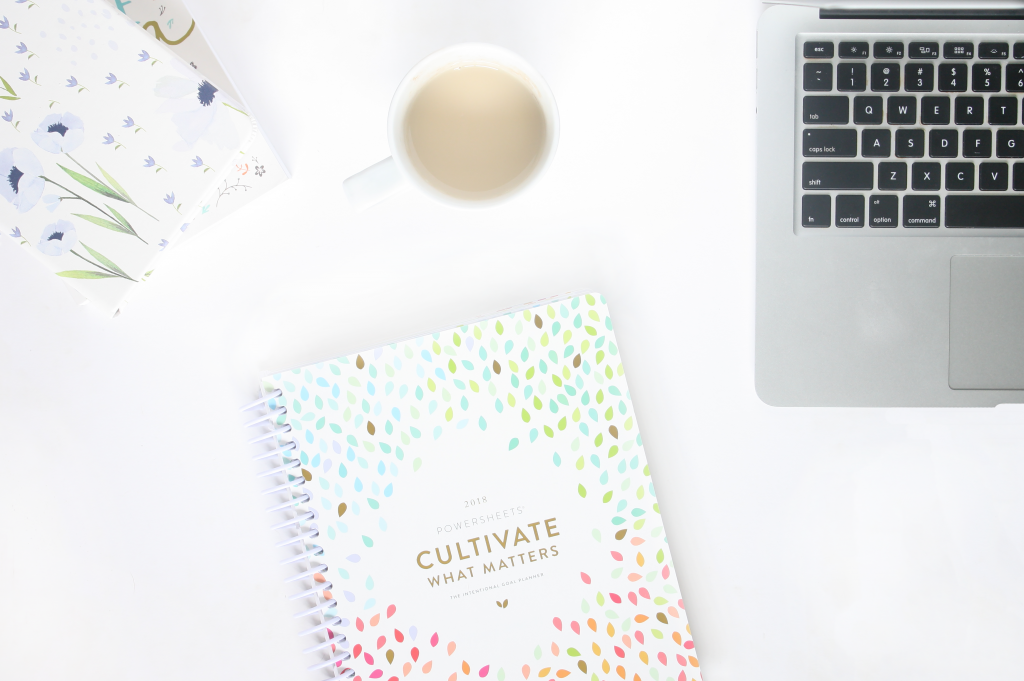 In all of that unknown, I kept finding myself totally at a loss trying to figure out what goals I could even set when I didn’t know what sort of time or energy I’d have to put into them. I know that a lot of people also find themselves in this position, whether it’s because you’re moving, starting a new job, taking your business full-time, having a baby, or have unexpected things that pop up throughout the year. So here’s what I’ve learned about setting goals during the unknown:

Get an idea of how long this period will last

For some circumstances this is hard to do, but if you have something like a move coming up then you generally have an idea of how long things are going to be up in the air. When we knew we were moving in 2016, I had a pretty good idea of when that would be and how long it would take, so I planned on having about 2 months of life being up in the air.

Obviously if you know when things are going to be a little crazy then it’s going to make it easier to plan around. Aside from the fact that you won’t be accidentally planning on launching something while you’re supposed to be moving or traveling, it’ll also help keep you from stalling on your goals. Instead of putting off working on your goals until afterwards, you’ll know that you can get started now, and then when you can pick back up later.

Prioritize what you need and want to do

This seems obvious enough, right? When you’re setting goals for the year and you know things are going to be up in the air for a few months, don’t forget that you have to prioritize your goals. Think about what you need to get done leading up to whatever is unknown in your year and leave those things you want to work on for the other months.

A prime example of this for me was last year. I knew I wanted to launch my shop and a mini course, but I also knew I was going to have to work on cleaning out our guest room and turning it into a nursery for Emma. Later in the year, I also knew that I was going to have to make some meals I could freeze to have for dinner later for the times when I wouldn’t be able to cook after Emma was born and my husband was deployed. That meant that I prioritized any goals for my business to be in the first part of the year, things I needed to do for Emma throughout the year, and then I could focus on the things I’d need to do (like give birth, ha!) at the end of the year.

Go easy on yourself

Last but not least, when things are up in the air, it’s hard not to feel frustrated because you want to do it all and do it all now. It’s also hard when you feel like you really can’t do any planning and just have to sort of fly by the seat of your pants for part of the year. I get it. At the end of the day, you just have to go easy on yourself. Try to accept that things aren’t going to go perfectly and that you may have to wait until later this year to work on some of those exciting ideas you have right now.

What’s your experience of setting goals during the unknown?

I’m sure we’ve all had our times of life being up in the air and still trying to set goals for our personal lives and businesses, so I’d love to hear from you! Share what your experiences have been and what helped you stay productive during that time in the comments :) 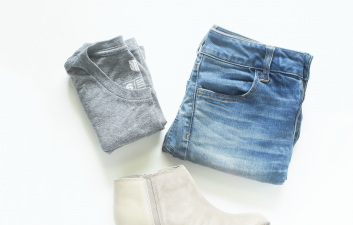 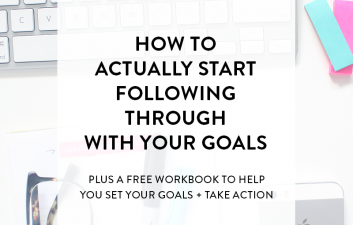 How to Actually Start Following Through With Your Goals 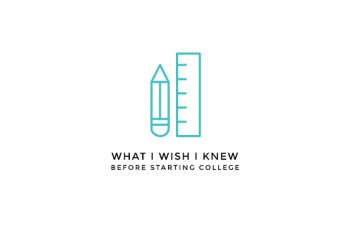 what I wish I knew before starting college

The past couple of weeks have been amazing and bit

We woke up yesterday morning and decided to go sho

Another day, another farmhouse loving client. As a

Do you ever stop and think about just how grateful

This error message is only visible to WordPress admins