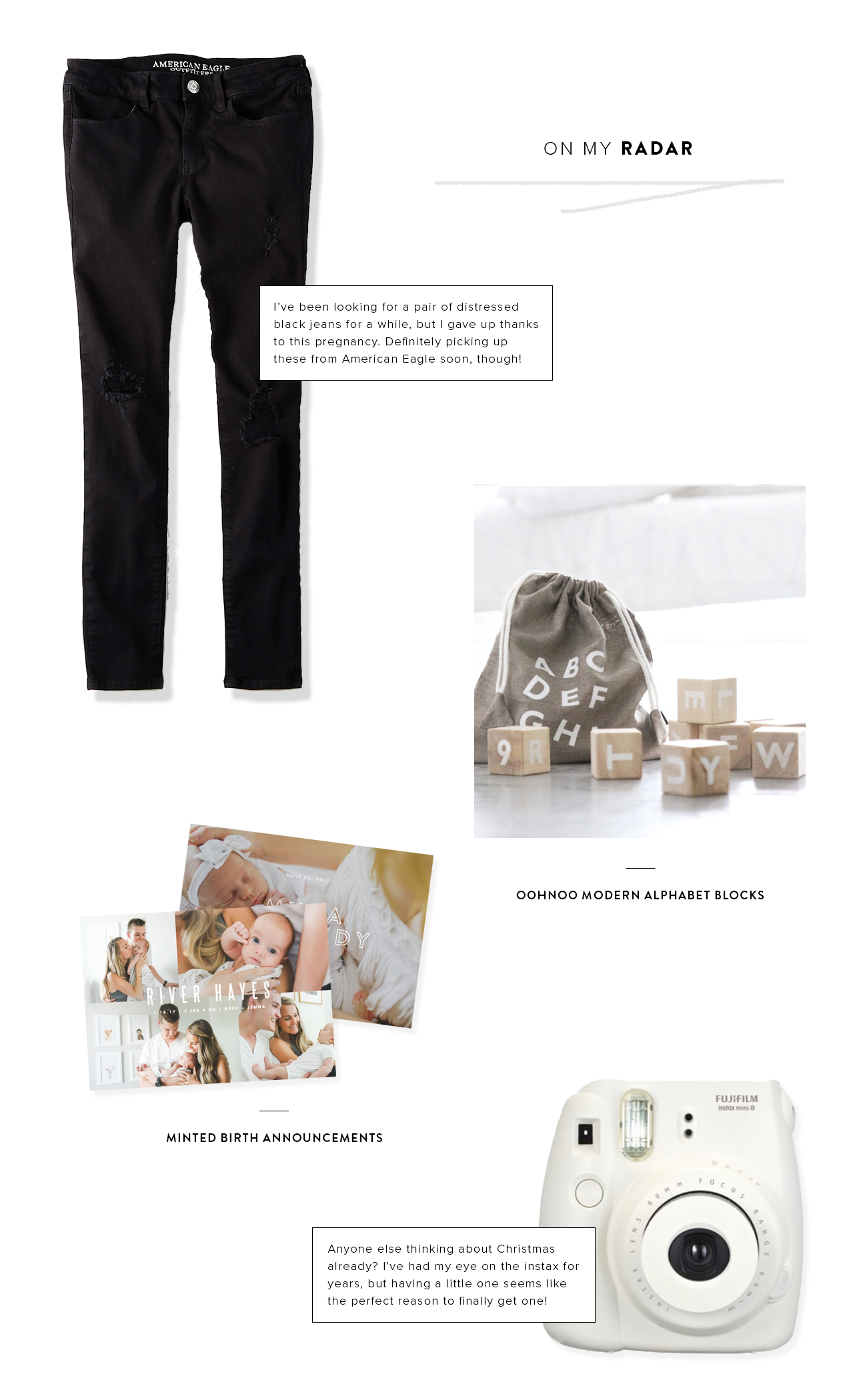 Ah, maternity leave. There’s something really nice about having an excuse to do nothing but lounge and read all day other than the hustle and bustle that the holidays usually bring around this time of year. I have to admit that even though my leave started last week, I’ve still had some last minute work to wrap up the past few weeks, which is precisely the reason I wanted to take off a few weeks earlier than I thought I really needed. I’d imagine no one wants to be pulling out the laptop to work while going through labor or a few hours after having a baby.

However, I’ve definitely had quite a bit of time to just aimlessly surf the web, which means I’m slowly but surely working through bookmarked posts, looking at things we definitely don’t need to buy, and trying to figure out what the heck to tell my parents I want for Christmas (is a relaxing holiday after being pregnant for what seems like a whole year not enough?!). So, I thought it would be fun to share some of the things that have caught my eye over the past couple of weeks with you guys in case you care to see :)

First up, these jeggings from American Eagle are seriously exactly what I’ve been looking since seeing one of the (very few) fashion bloggers I follow share a similar style. I love that they’re distressed, but it’s not too much. The only problem? Well… I’m still pregnant, and I’m not really sure how long to expect to not want to wear real clothes. Let’s also not even talk about fitting into pre-pregnancy jeans. I haven’t gained a ton of weight, but I know better than to expect to pull those suckers out sooner rather than later. I actually also found a maternity jean version at Old Navy, and aside from the fact that they’re sold out in my size (go figure), I’m also not sure how much longer I’d actually need maternity jeans.. Mom friends, I’d love to hear your experience here!

Let’s be honest, half the stuff I’m looking at online are baby related, and one of those things are these super cute, modern alphabet blocks from oohnoo. We haven’t gotten baby a lot of toys; we actually haven’t gotten her any yet – we have stuffed animals and books instead. But I came across these blocks on Instagram a while back, and I’ve been lusting over them ever since. This is so shallow, but being a designer font matters to me on the blocks, which is why I’m almost willing to pay an arm and a leg to get these.

The other baby related thing I’ve been thinking about a lot are birth announcements. I found this and this one when I was browsing that I really like. I think it’s a lot more fun to send a card in the mail than just do a lot of texting and calling to let people know when our little lady has arrived, but I also come from a family who has sent Christmas cards to family and friends for as long as I can remember. Does anyone else bother with this? If nothing else, maybe I’ll just design something that we can put on our fridge as a keepsake.

Last but not least, my parents are already thinking about Christmas presents. I swear we start forcing each other to think about what we want in the middle of summer. Year after year for a long time it’s been difficult to come up with things that we want because between my husband and I we usually just end up buying whatever we want. Aside from that, I’ve started to become more and more of a minimalist, which means I can’t bring myself to ask for things just to ask for them. However, one thing that immediately came to mind this year was to finally ask for an Instax Mini. I’ve never felt like we’d get much use out of it, but now that we’ll have an addition to our family, I think it would be another fun way to document our life.

Anything catching your eye lately?

If you have something you’ve been thinking about getting or a must-have already on your wishlist for the holidays, feel free to share in the comments!