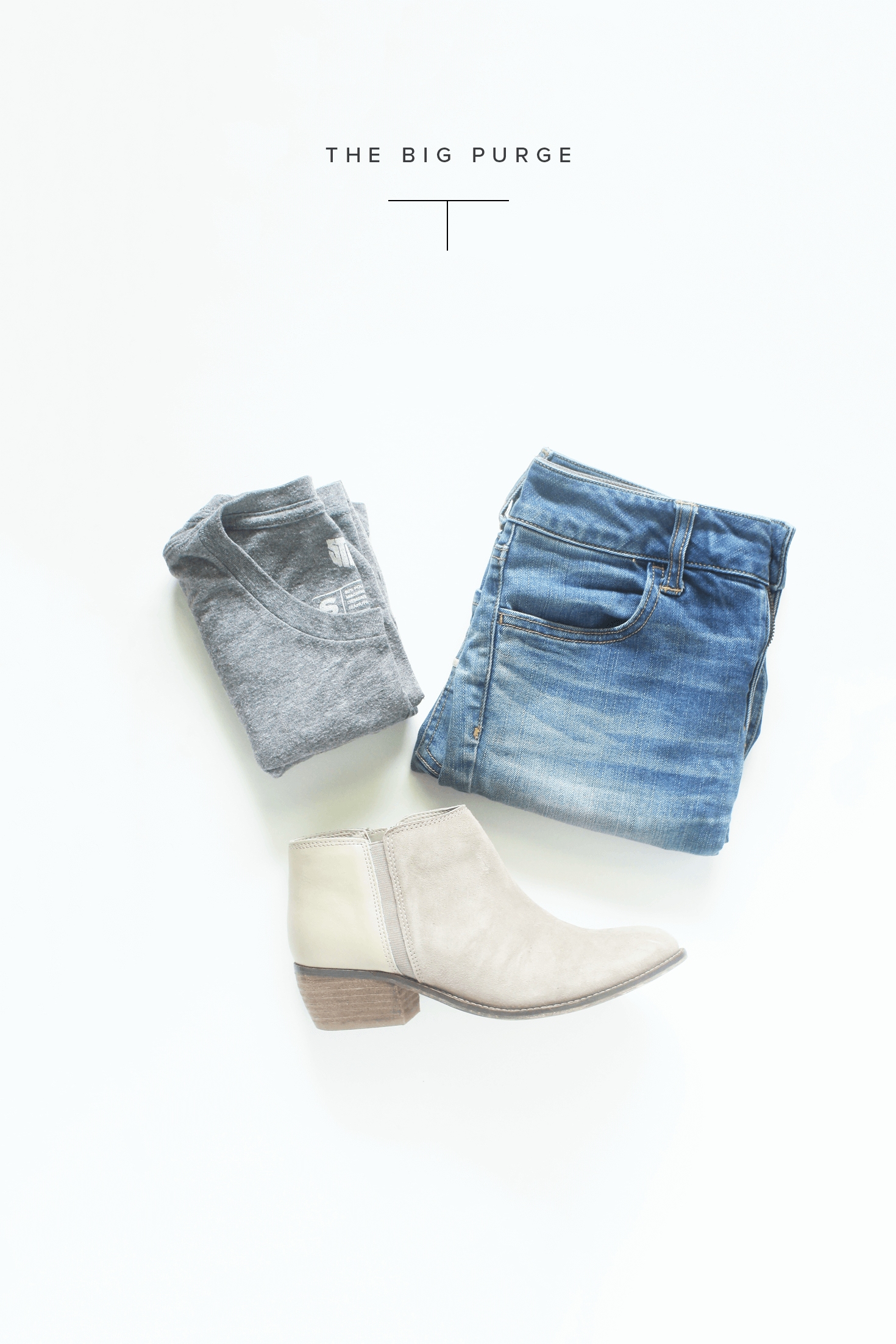 When we found out I was pregnant back in March, one of the first things that went through my mind was that we were going to have to turn our guest room into a nursery. I was actually pretty excited about the idea of decorating a new space, but there was one thing I was definitely not excited about: tackling the closet.

Since we moved in last year, we’ve been using the closet as a sort of dumping ground for random things (read: extra curtains, pillows, etc) and stuff I didn’t want in the attic (holiday decorations, Christmas tree, etc). Our house is a lot smaller than the townhouse we lived in previously, which means less storage space. I knew this meant we were ultimately going to have to start getting rid of things or moving stuff around to make it work.

So here’s what I did:

Junk is probably not the nicest way to refer to what was in there, but let’s be honest, a lot of it was old and no longer being used. Aka junk :) Here’s a quick list of things I remember being in there that falls under this category:

And so on. I guess we can break this down in two categories, the to keep pile and to ditch pile.

I got started by moving the “to keep” items to other places around the house, which ended up being far better homes. Our extra comforters and the curtains went in our (now) stuffed linen closet, a few things were moved to the top shelf of our bedroom closet, and some of the random boxes and shelves from our old bathroom were moved to our “coat” closet at the front door, which is literally just for storage.

Speaking of the storage closet, the stairs to our attic are a little funky, so I don’t go up there. That means I needed a place to put our Christmas tree and tote with holiday (aka Halloween and Christmas) decorations. I ended up taking two of the six wire shelves out of the storage closet so I could squeeze those things in there. It definitely doesn’t look pretty, but I’ll be able to get to things even if my husband is gone.

The pillows and the old end table were things that I knew I didn’t want anymore, so I ultimately decided to list them for basically next to nothing in the Facebook Marketplace. You guys, it totally paid off. The pillows were about 2 ½ years old and the end table was literally like four years old, but people wanted them so they sold quickly. If you have stuff that you just need to get rid of but are still in good enough shape to make a little money on, I definitely recommend trying out the marketplace with them. Just be sure to meet in a public location when you officially hand them over.

Among those things, we also decided to ditch the wire shelving system that was already in there for something a little nicer looking. While we could have held on to the whole setup, I knew for a fact I wouldn’t care about putting it back up when we were trying to sell the house, so all of it went out with the trash. We have enough wire shelving in literally every other closet in the house, so I don’t feel like we’ll be missing that stuff.

One of the last things that we had in the closet was a basket of clothes we hadn’t looked at since we packed them up last year to be moved. Half was mine, half was my husband’s, and I knew it was being ignored because it was full of clothes we don’t wear (my stuff) or don’t have a need for right now (my husband’s stuff). I finally got inspired one day to go through it all, which was the same day I organized our closet, so I grabbed a trash bag and got comfy in our room that day.

As crazy as it may sound, I’m one of those people who hoards things for a long time and then BOOM! It all goes in the trash when I hit a cleaning frenzy. This is exactly what happened with a lot of the things I had in that basket. Shirts that were too small and a lot of college t-shirts got the dump that day. Will I regret it in the future? Maybe. Do I regret it now, maybe a month later? Absolutely not. I have memories of college, which may last a few more years (hah!), the shirts probably won’t ever see the light of day again, though. My husband had already gotten rid of a lot of stuff like this when we moved out of our apartment before his bootcamp a few years ago, so on his part I just had to fold and organize everything.

If you need a big purge in your house…

I know that a minimalistic lifestyle is very #trendy right now, but a lot of people find it hard to actually purge stuff, so if you’re feeling a little clingy or unmotivated to tackle things around the house, here are some tips:

Will you be purging anytime soon?

Did this inspire you to do a big purge at your house? I’d love to hear what spaces you would tackle first in the comments.