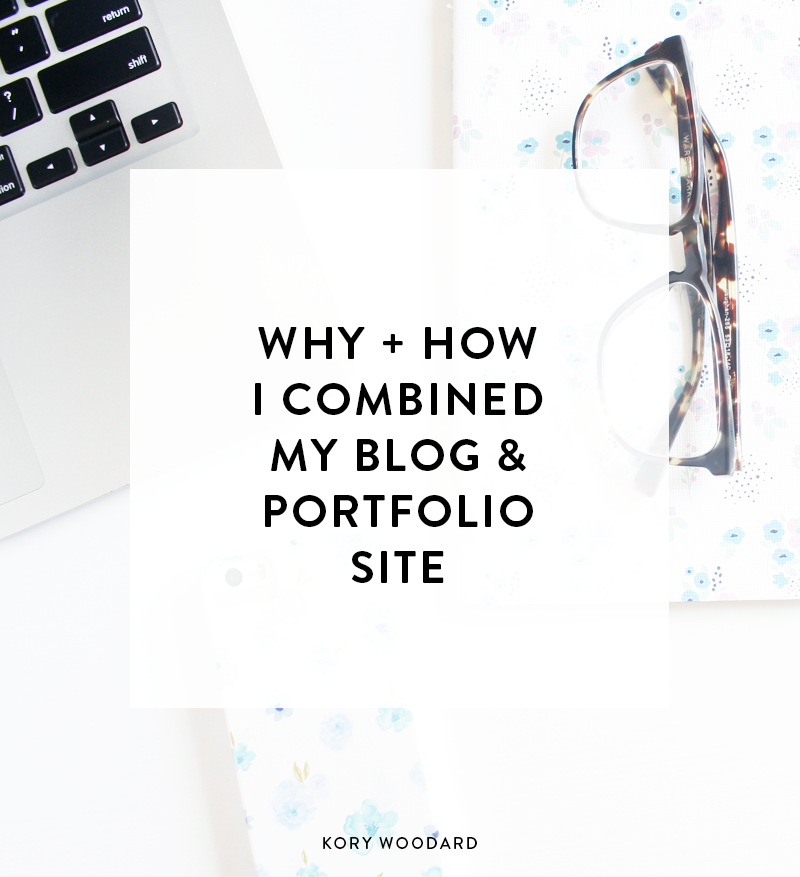 You might have noticed a few weeks ago that things around here starting looking a little different, and you’d be right. After months of thinking and trying (and failing) to plan to combine my blog and portfolio site, I finally decided to get it over with already. In addition to combining the sites, I went on ahead and launched a new design, which is something I’ve been doing once a year for a while now.

I have to say it wasn’t easy to do it, but since I combined my sites things are so much easier. I don’t have to worry about managing updates and security for two sites, making sure any content on my portfolio pages are up to date, and now I’ve eliminated a step when it comes to adding new work to my portfolio. So, since I know some people might still be running their sites the way I was, I wanted to share with you guys how and why I combined the two!

Why I combined the two sites

You might think I’m crazy for even having my sites separate in the first place, and honestly I totally agree with you now! I couldn’t tell you the exact reason why I separated them in the first place (because I can’t remember), but here’s how the process went shortly after I started blogging:

Having two sites meant that since I was regularly posting to my blog, that was the site I was on most often. I hardly ever logged onto my portfolio site, so I was going months without adding new projects and a friend or potential client would politely point out that the months I was currently booking for were often old. When I would finally log on to my portfolio site, I’d have several plugin updates, projects to add, and updating my pricing and availability. It often ended up being too much extra work.

How I combined the two sites

So, earlier this year I knew it was time to make the jump and combine the two sites. I had also been on GoDaddy since I bought my first hosting plan in 2010 or 2011, and although I’ve never had as many issues as others have with them, I knew I wanted to move over to Flywheel (affiliate link).

Unfortunately, I hadn’t done enough planning when I finally made the decision to combine everything, which is part of the reason I wanted to share this post with y’all. I had no idea of the logistics of combining two sites as well as migrating to a new host in the mix of it all. The only real thing I had done was pay for my hosting with GoDaddy month to month so I wouldn’t be out of too much money when I finally made the jump.

First, I contacted GoDaddy and asked if there was an easy way to basically move the files and content on my ‘blog’ sub domain to my main url. Their final answer was: not without breaking links and potentially some stuff in the WordPress install.

So, I then proceeded to back everything up. Like, I literally waited 4+ hours for a .ZIP file of my ‘blog’ sub domain to download to my computer, which was totally not necessary.

Then, I went over to Flywheel and looked at their details for free migrations (an amazing thing they offer!). It said it could take 1-3 days, and when I decided to finally merge my sites, the blog had already been down for probably 18ish hours because I was updating the design. I didn’t want to have to wait up to 3 days, and I saw that paying customers had priority, so I went on ahead and purchased my hosting plan.

Once that was done, I went to “order” my migration and saw that there was an expedited plan, which could be done in about 8 business hours. Being the impatient person that I am, I decided that it was worth the extra money to keep my sites from being down too terribly long.

Once the migration was done (after about 7 hours, because they needed extra information from me a few times before moving forward), the next part came to hooking up the primary domain so everything officially lived under one roof. I anticipated this to be difficult on GoDaddy because I still had my hosting account with them and Flywheel doesn’t supply you with Nameservers (if you don’t know what this is, don’t worry about it :) because of how they’re set up. Surprisingly, all I had to do was cancel my GoDaddy hosting plan. That was scary, but Flywheel had backed everything up and uploaded it to my account with them, so I hit the cancel button and probably a sigh of relief.

The very last step in the process was figuring out how to make sure all of my old links to blog posts on Pinterest and around social media and such still worked. All I ended up having to do was adding “blog.korywoodard.com” as a domain on my Flywheel account, and everything worked perfectly.

After all is said and done, I really wished that I’d just kept my two sites together to begin with. When you’re working and blogging under the same name, there’s no real point to have separate sites. It creates so much more work than it’s really worth. However, even though the process was pretty stressful while it was going on, it was all very worth finally making the jump to having one site.

If you ever find yourself in the same position trying to combine a few sites, feel free to reach out in the comments or via email, and I’ll be happy to provide advice or at least some funny GIFs to help you get through the transition!