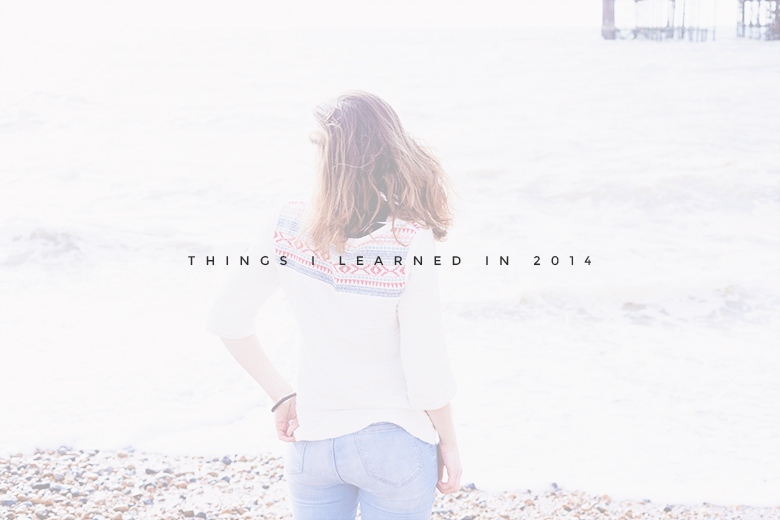 Holy smokes. We’re mere hours away from 2015. This year has been a doozy, but not necessarily in a bad way. When I was planning my posts for this week, I peeked back at what I did last year at this time and I found this gem. I loved looking back and reading what I learned, so I thought it would be fun to do it again now!

I’m stronger and more independent than I remembered When D was getting ready to leave for bootcamp back in May, I felt weak. I was scared at how we would both handle living together for four years to only communicating through letters for two months and then living apart for who knew how long. However, after I got back home and into a new routine, I learned that I’m still the strong independent woman I’ve always been. D put that whole experience in the best words (better than I think I could) back when we finally got a few minutes alone after his graduation when he said, “I thought I couldn’t do it without you, but I did. I know that I can do it without you now, but I don’t want to. I don’t need you, but I want you.” That may sound weird depending on who you are and what you’ve been through, but I think it’s exactly true and for both of us.

Trust the season; what’s necessary will be provided Around the exact time that D was leaving in May, I was worried about work. Where would my next jobs come in? After graduating school, I was worried on if I’d actually have enough work to fill my days. The thing is, though, every time I felt worried I focused on abundance and letting go of my worries and always pulled through. I’ve had more clients this year than any year previously, and I’ve done some of my best work. I’m so blessed that things are moving smoothly with freelance, which leads me to my next point…

I can and I am doing this I’ve been headstrong about freelancing after graduation for the last year and a half of my college career. It was crazy to hear people not agree and put down that goal, but I was determined to do it and to be successful doing it. Well, I’m doing it. Every month since graduating I’ve made more money than the previous month, and when I calculated each month’s income, I thought of every professor or peer that was unsure about my post-college plans. I’m so proud of myself for sticking with something I’ve been wanting to do, and I’m so excited to see where this self-employed journey takes me!

Post-College life is a million times better than being in school A less serious but totally real one here! Since my last year of high school (a semester of junior year and a semester of senior year, since I graduated early), I haven’t really been one for school. It’s not that I don’t do well (I’ve been blessed to be a straight A student), but I just don’t enjoy it like most people do. Around the beginning of my last semester of my junior year of high school I felt mentally past my peers and I just wanted out to do my own thing. Around the same time in college I had the same feeling, so I’ve been just wanting to be done for a while now. I’m so, so happy I finished school, but I’ll definitely admit that life after college is much better than life in college. I love the freedom to do whatever I want whenever I want during the day, especially work, which I truly enjoy!

2014 has been a seriously cool year. I can’t believe I’m ending it a college graduate, business owner, married, and living in a new state. How funny! I can’t wait to see what 2015 brings!

Feel free to share a few things you’ve learned this year in the comments!