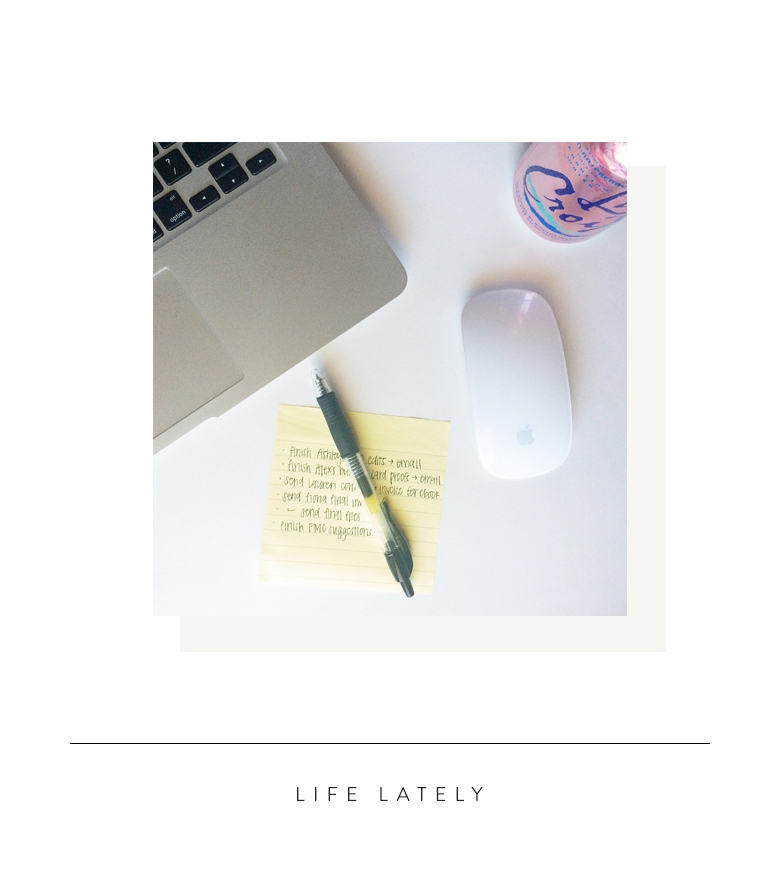 Goodness – if I keep up this series next year, I’m going to have to start sharing these posts more often! It feels like so much happens in a month, and this past one has been no exception! If you follow me around the web, I’ll skip the part of this post where I would talk about how much I’ve been working, though I have been, and I lot. I’ve got tons of new work to share with y’all! Okay, so the rest of life:

+ D officially signed our lease this weekend. We have an address, and we have an awesome new home to look forward to (less than three weeks now!). I’m going to be sharing a little bit about it Wednesday, so I won’t go into too much detail now, but that’s been our really big exciting news on that front.

+ Speaking of the house, we are narrowing in on the styles and furniture that we are going to be getting. I’m so happy because our tastes are working perfectly together. (Either that or D is just letting me have my way… ha!) I think we’re going to have a nice mix of modern yet classic look, and we’ve definitely decided to move slowly on buying, which is much more cost effective!

+ I’m so excited for registration to open to everyone for Brand Catalyst next week. I can’t believe it’s already almost here. Keep an eye on the blog because I’ll be sharing an official post about it next week. If you’ve been thinking your ready for a change and to take things to the next level, this course is going to be for you.

+ I’ve started working on redesigning this here blog! I think it was around spring the last time I changed the design, and I’m really ready for something new for next year. I’m trying to decide if I want to simplify my logo with the new design, and quite frankly, we’ll just have to wait and see. I’m hoping to launch the new design in January, but y’all designers know how that is!

+ I opened the annual reader survey last week (go take it here if you haven’t already). I’ve peeked at the responses, and they’ve really had me thinking about where I want to take the blog next year. I think I know where I want it to go, but I really want to let that settle and see how I feel about it come January.

Well, I guess that’s a mix of personal and not-so-personal, haha! In other news I finally jumped on the House of Cards train, and I love it! I think I finished both seasons in less than a week. Other than that, show wise I’ve been hanging on every episode of the Walking Dead and Sons of Anarchy. I know.. I have a wide mix of shows that I like!

Anyway, let me know what you’ve been up to lately; I want to hear!