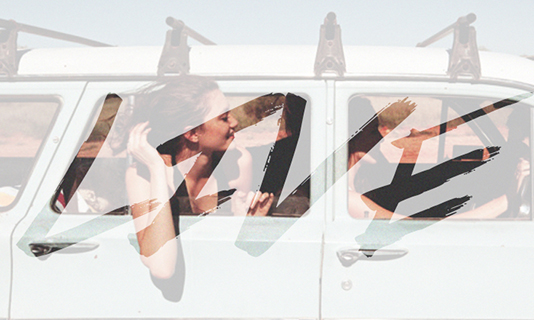 It’s funny how things come to you when you’re not looking for them, isn’t it? Like when you’re least expecting it something will hit you like a ton of bricks. Well, that’s what happened to me on Wednesday. Last week I read this post by Patti Murphy, and I was stumped. After New Years I saw so many bloggers were sharing their word, and I have to admit I felt a bit left out. Coming up with one word that you want to encompass your whole year? That seemed so hard. Even after I thought about it a bit, I couldn’t find a word that seemed to fit me. It wasn’t until I stopped worrying about it, relaxed, and put on some upbeat music when the word came to me: live.

If you know me in person, you know that I don’t take risks. I’m outgoing, but I don’t do much. I’ll talk to anyone, I’ll voice my opinion on a touchy subject, but I’m more on the timid side when it comes to actions. So, when ‘live’ come to me, I knew in my heart that was my word. In 2013, I want to live. Not just in the ‘not just be present, but participate’ way, but really live. I want to break out of my shell more, explore a new place, make new friends, go on a road trip, and live.

I’m so excited about this revelation! The word came to me while I was listening to the upbeat ‘Brokenhearted’ by Karmin. It made me think about the power of upbeat, happy music. Towards the end of last year I realized what a difference it made in my day to start of the day with a song that had me singing at the top of my lungs, even at 7AM! So, I was inspired. By the word, by the song. I decided to make a playlist of some of my current favorite upbeat music. It’s all mainstream, so if you listen now and get inspired then you’ll feel inspired when you hear these songs on the radio or on tv.

I decided not to list the songs for you here, and that’s because I don’t want you to judge the playlist by what’s on it. Instead, I’m encouraging you to download it and give it a shot. You’ll be amazed at what a handful of pop songs can do for your mood.